Whichever type of Aquascaping style you’ll choose, it doesn’t hurt to have a minimal knowledge of anatomy and biology of the species of fish you’ll use in your aquascape. So keep reading to find out more about tropical fish, their natural habitats and how to keep them healthy and happy in your home aquarium.

In nature, fish can be found in every water system around the globe.

The countless diversity of fish habitats worldwide has generated the evolution of various shapes, sizes and colors of fish. This makes fishkeeping such a fascinating and interesting hobby. Tropical fish found in aquascaping come from several different geographic regions.

Most aquarium fish originate from Asia, Africa, Central America and South America. At present, around 1800 tropical fish species are involved in the aquarium trade internationally.

The Amazon basin is home to many tropical fish species.

What is a fish?

Fish are vertebrates which means they possess a backbone.

Most fish are ectothermic (cold-blooded). Cold-blooded animals can’t raise their body temperature above that of their environment. They breathe oxygen using their gills and most species are equipped with two pairs of fins as arms, a dorsal and caudal fin, as well as other fins along their bodies. They use these fins to swim across the water.

Almost all fish are covered in scales, thin overgrowths of their outer skin that protects the body. Scales secrete a slimy coating that has two purposes: (1) it protects the fish from harmful parasites and bacteria, and (2) it helps them to easily slip through water. 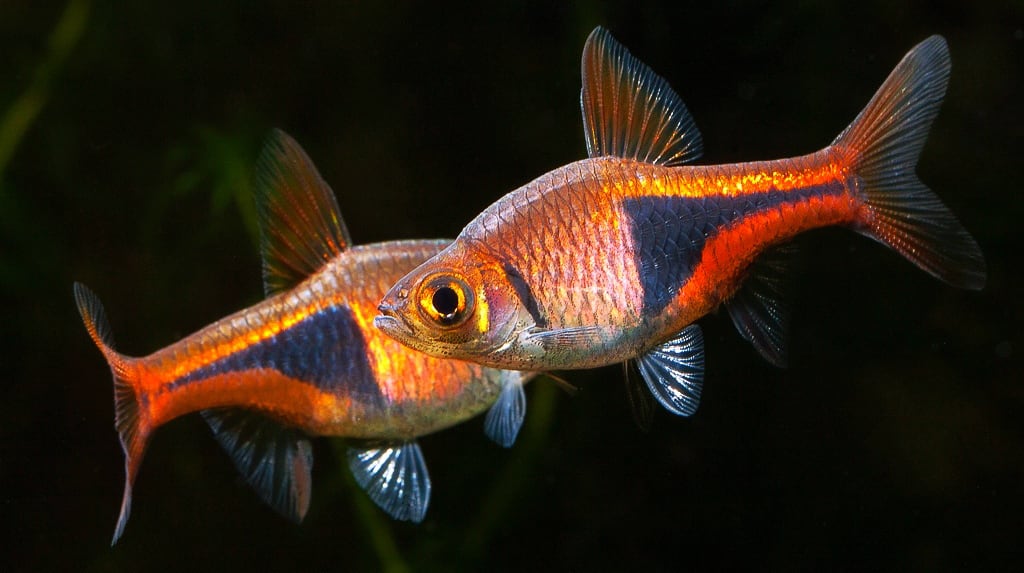 The Harlequin rasbora is a popular fish among aquascapers.
© Peter Maguire

Fish have many organs in common with most vertebrates, while others, like the gills and swim bladder, are specific only to them.

The swim bladder is a special elongated gas-filled organ situated underneath the vertebral column. It helps the fish maintain buoyancy in the water. To adjust the amount of gas in the bladder the fish gulps down air or the gas is released from blood vessels.

Fish have unique respiratory systems. They extract oxygen from the water with the help of gills. The gills are composed of fleshy filaments with thin blood capillaries and are protected by bony flaps known as opercula.

After water enters the fish’s mouth, it is then forced over the filaments and out through the opercula. In this way, the oxygen dissolved in the water is easily transported into the bloodstream through the filaments. 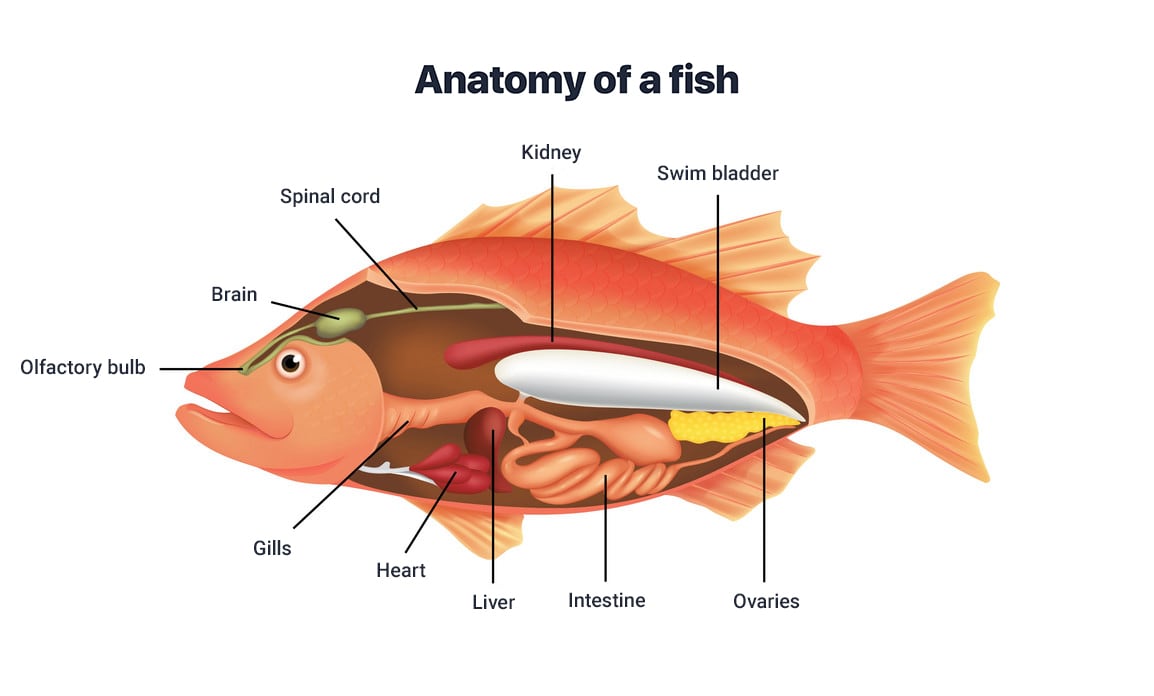 Some fish such as the Siamese Fighting Fish (Betta splendens), have the ability to breathe oxygen from air. They do so with the help of a special breathing structure known as labyrinth. These fish usually live in bodies of water with very low levels of dissolved oxygen, like swamps, small ponds and rice paddies.

Fish posses special senses and means of communication with their environment. The lateral line is a system of tactile sense pores which is unique to fish, and is used to detect movements and pressure changes in the surrounding water.

Special barbels grow on fish that live in low light conditions where visibility is poor. They contain touch and taste organs which help the fish find food and easily navigate through water. 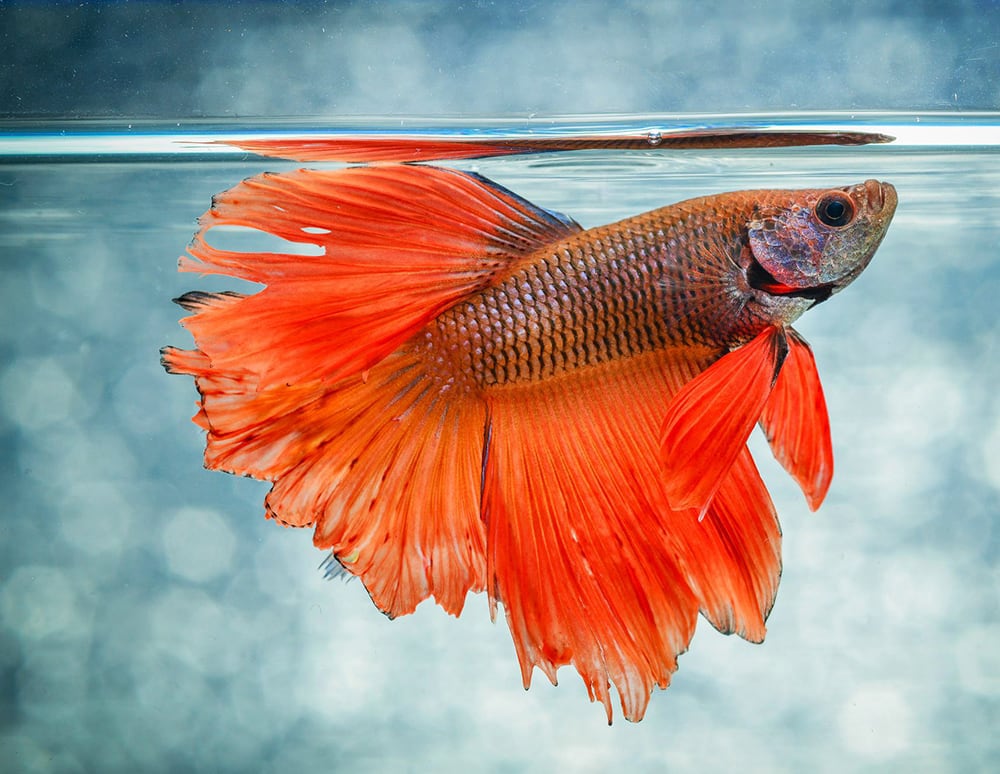 A Betta fish reaching the top for a fresh breath of air.

Feeding your aquarium fish is easy. There are countless food options in pet stores today. Generally fish feed can be grouped into two types: fresh live food and dried. While dried foods can easily be found in specialised stores, live foods such as Brine shrimp or Bloodworms are more difficult to find.

Dried foods come in many forms and sizes. Choose one that is appropriate for your fish size and its dietary preferences (some fish prefer a plant-based diet). Among the most common you’ll find:

This way your fish will stay healthier and be more prepared for breeding. You can choose from various live foods such as:

Some other foods that you can try are usually found around your kitchen and they include: sliced cucumber, carrots, peas, beef heart and mussels (for predatory fish).

A general rule-of-thumb is to feed your fish as much as they can consume within a period of 2-3 minutes. This should be done 2-4 times a day.

Most species of aquarium fish are egg layers.

Judging by their breeding behavior, fish can be divided into two main categories: (1) egg-layers form the majority and they practise external fertilization, and (2) livebearers, in which case the eggs are fertilized inside the female’s body.

Some species lack parental care and show no regard to their eggs and offspring. They will eat them on the spot. While other display a high level of caring for their eggs and fry, guarding them against possible threats.

In general, males have slender and slimmer bodies and their colors tend to be more saturated, especially in breeding season.

Females have more washed colors, rounder bellies and shorter fins. In some species, for example those belonging to the Cichlidae family, males are more robust and develop a hump on their forehead.

These various differences between males and females is called sexual dimorphism.

Depending on the way in which every species adapted to its own environment, fish display a number of egg-laying strategies and habits:

Fish that deposit eggs usually form a strong pair bond. They will carefully choose a place where they can lay their eggs. Could be a rock, a leaf or any other surface inside your aquarium. Prior to the spawning process, they will clean the chosen place with their mouth.

This type of breeders have strong parental instincts and they will actively guard their eggs and fry.

The Angelfish, Discus and a high number of species belonging to the Cichlidae family, display this kind of breeding behavior. 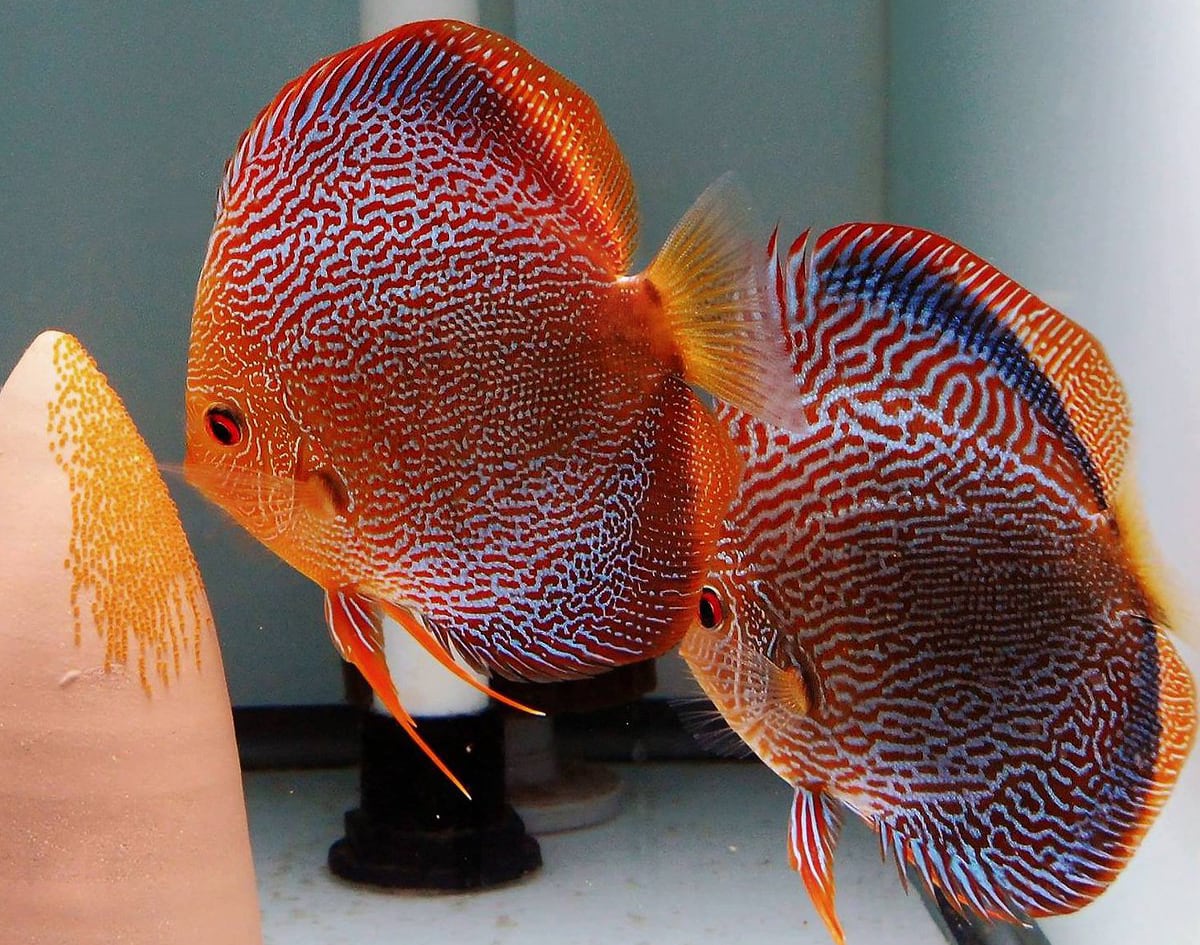 A pair of Discus fish with their eggs.

In this breeding scenario, the females release a large number of eggs across the aquarium, in a random manner. Some eggs will stick to plants while others fall to the bottom. The males will actively chase the females around while fertilising the eggs. Egg-scattering fish will eat their eggs and offspring.

The Cyprinidae family consists of mostly egg-scatterers, like Barbs, Danios, and Rasboras. Tetras and other characids also scatter their eggs. 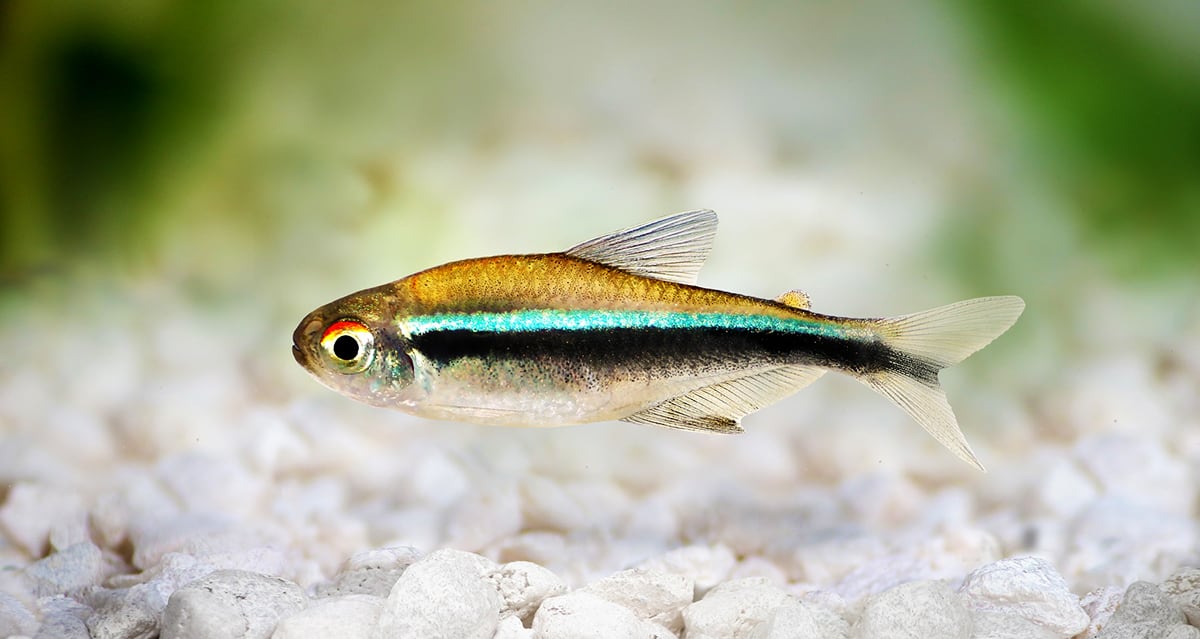 Black neon tetra is an egg-scatterer.

Common to species that live in muddy pools of water that dry up every year. The eggs remain in the mud and hatch as soon as the rainy season comes.

The Killifish, which has adapted to living in ephemeral waters, breeds this way. 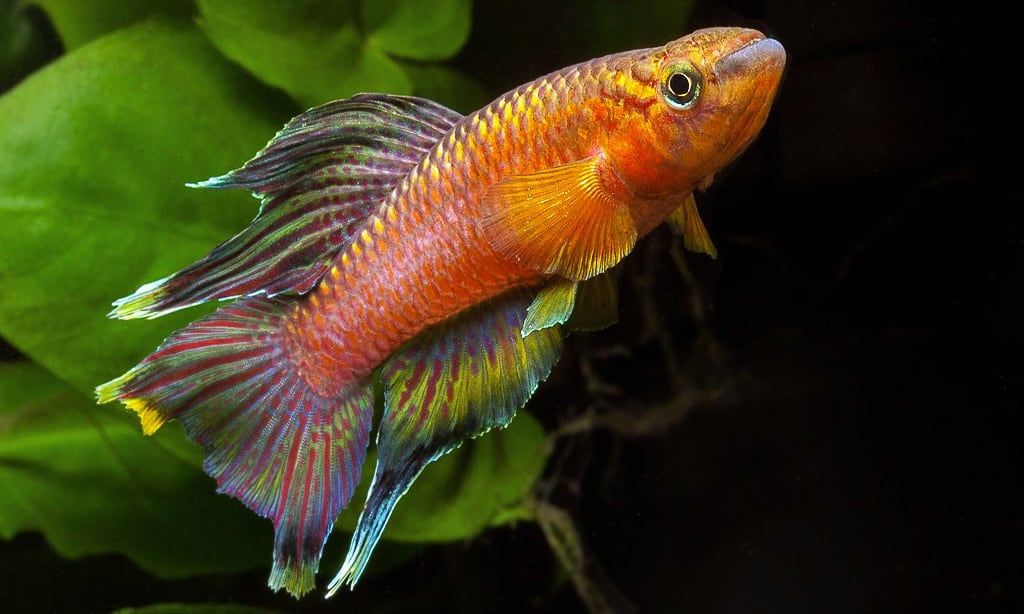 One of the most interesting breeding behavior is displayed by mouth-brooders. The fish will take the eggs into its mouth and keep them there until they hatch. They do so to protect them from potential predators and high currents which can sweep the eggs away.

African cichlids include the highest number of species that are mouth-brooders. 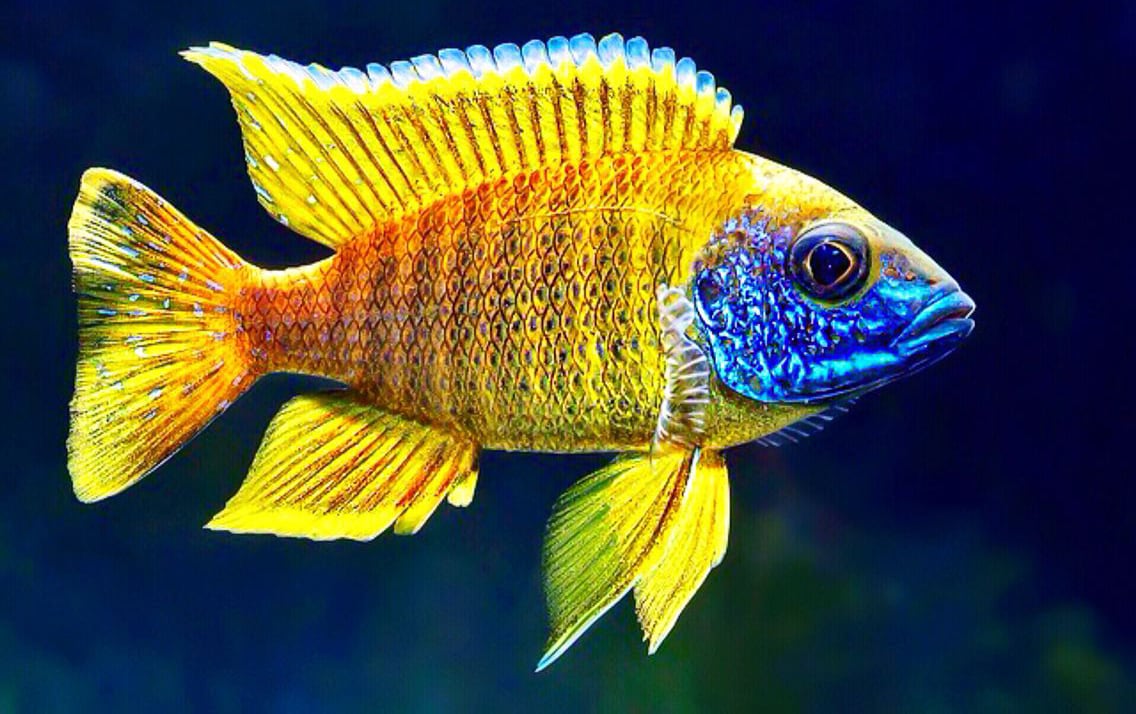 The Peacock cichlid (Aulonocara sp.) is a mouthbrooder.

The male has the leading role in the breeding process. He carefully builds a bubble nest at the surface, where the eggs will be deposited, and later the fry. After the spawning ends, he’ll drive the female away so it’s best to take her out of the breeding tank at this stage.

If one egg or fry falls to the bottom, he’ll carefully bring it back into the nest.

This unique breeding style can mainly be seen with the Siamese Fighting Fish (Betta splendens). Other anabantoids, like the Pearl gourami also build bubble nests when breeding. 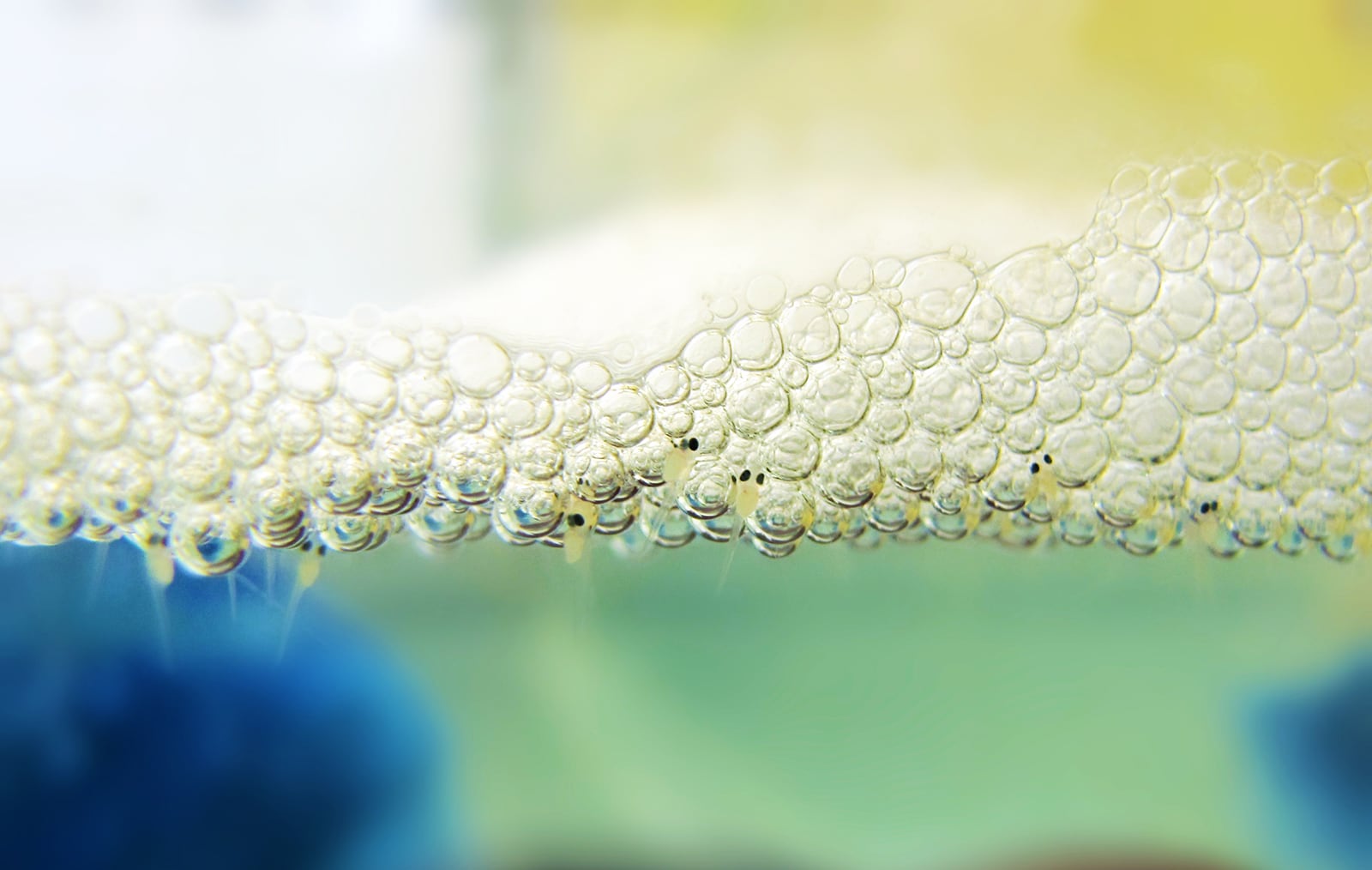 Most common fish found in aquascaping

Not all species of freshwater tropical fish fit well in your planted tank. Aim for small to medium types, like Tetras, Barbs, Rasboras and some small cichlids like the Blue Ram. Some aquascapers even use Discus in their planted tanks but... schooling fish work the best! 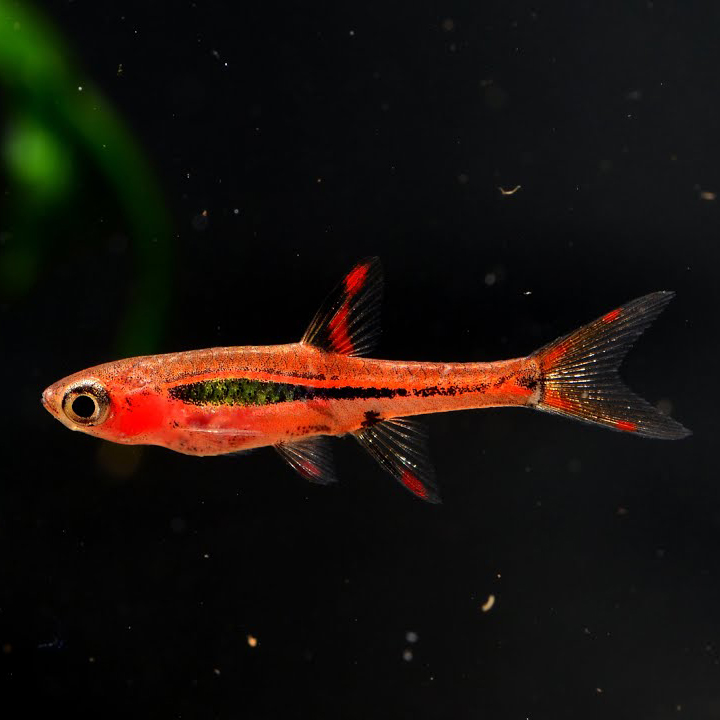 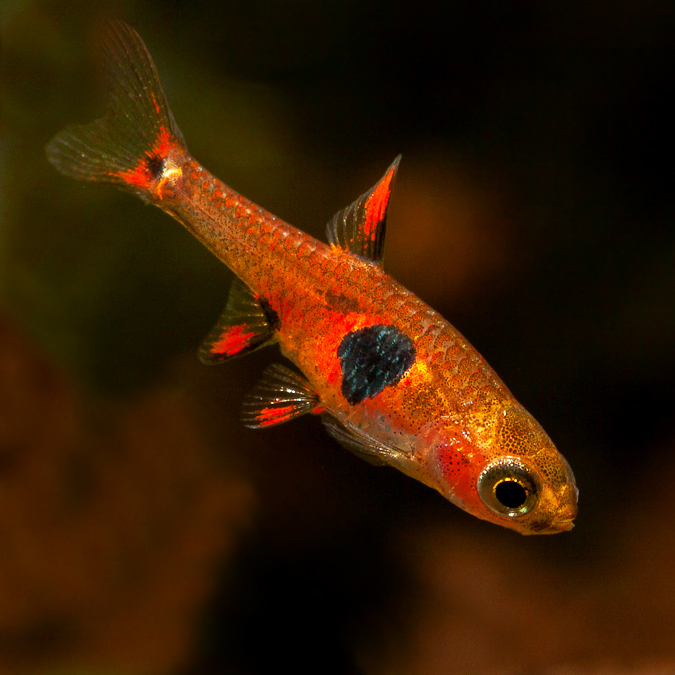 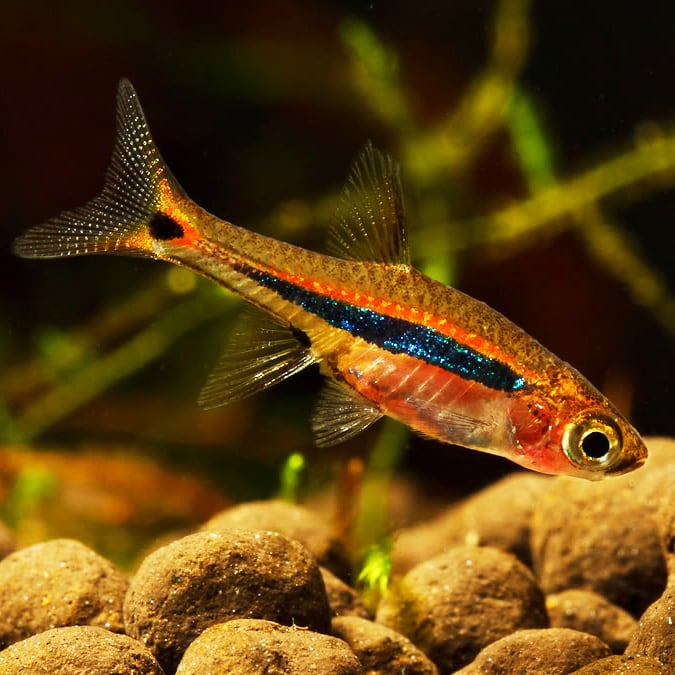 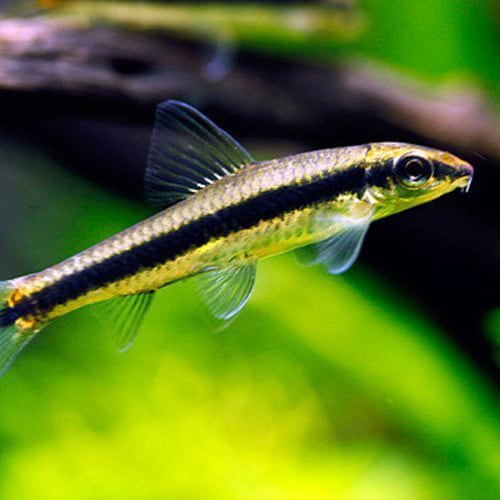