The slow crawlers and quirky critters of the aquascaping world. Freshwater aquarium snails and shrimp, aka inverts (short for invertebrates), have various roles in your planted tank. Some just look pretty, while others have more important tasks, such as keeping your aquascape algae-FREE!

Invertebrates in the planted tank

Freshwater aquarium invertebrates can be divided into molluscs and crustaceans.

Invertebrates are animals that don’t possess a vertebral column (backbone). Freshwater aquarium invertebrates can be divided into 2 groups: molluscs (snails) and crustaceans (shrimp, crayfish and crab).

While some small species of crayfish are safe to keep in a heavily planted aquarium, crabs on the other hand tend to get larger.

Plus they have an aggressive behavior towards other aquarium inhabitants and are destructive with their environment.

Last thing you want is for them to start chopping up your carefully designed aquascape. So for the purpose of aquascaping, we’ll leave crabs aside.

Peaceful aquarium inhabitants that help you get rid of algae.

Aquarium snails are the most common inverts found in aquascaping. They come in a variety of colors and sizes. They’re peaceful inhabitants and some will help with reducing algae growth in your planted tank.

Many aquarium snails are hermaphrodites, meaning they have both female and male sexual organs. So a single individual can reproduce very quickly and often. They lay their eggs on the glass surface, plant leaves or hardscape materials found in your planted tank.

This gives snails a big disadvantage, as they’ll soon turn from pets to pests, overpopulating your aquarium environment. For this reason you should always keep an eye on your snail population in your aquascape and get rid of any excess eggs. 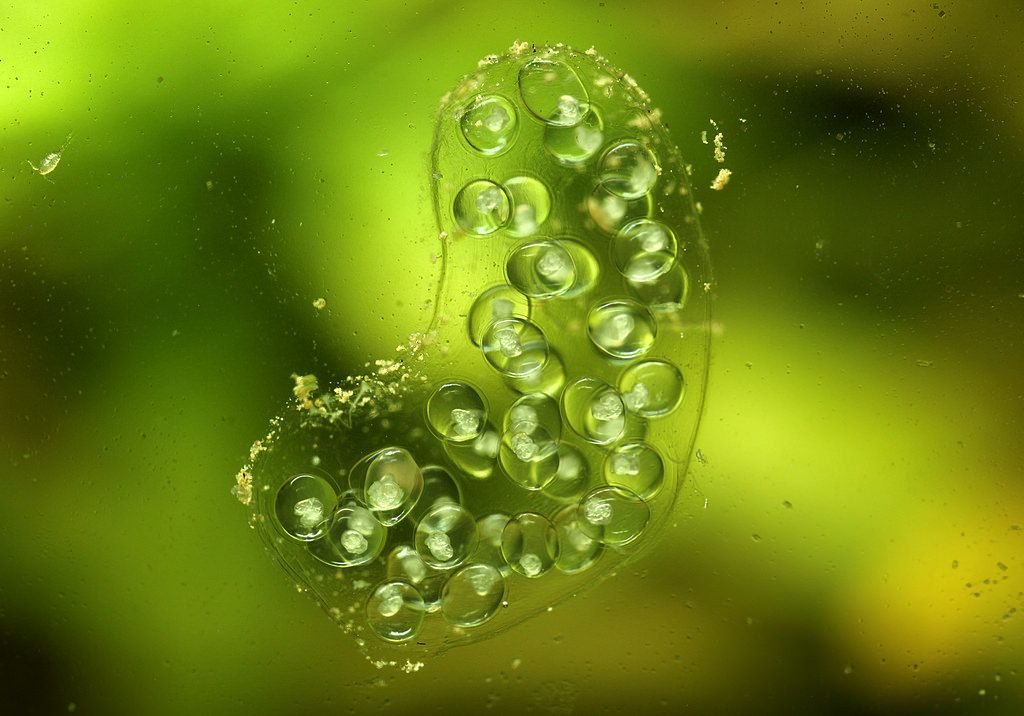 Avoid keeping larger snail species such as the Apple snail (Pomacea diffusa), which is known to have a great appetite for aquatic vegetation.

Aquarium snails usually feed off algae, excessive fish food (flakes, pellets) and other debris found at the bottom of your tank.

The Assassin snail though, is a voracious predator, hunting and eating other snail species, fish eggs and dead flesh. Because of their true carnivorous nature they will totally ignore algae from your tank. 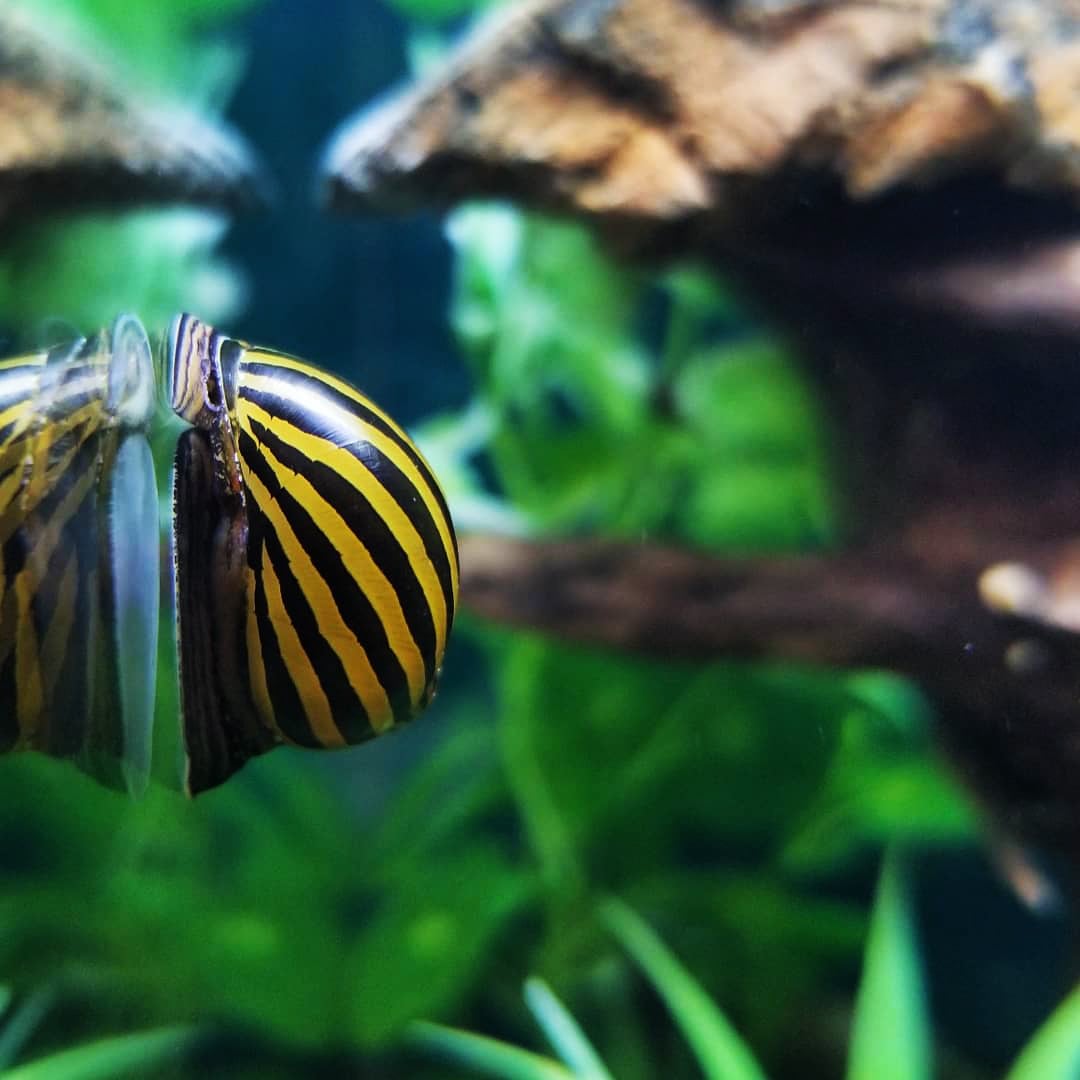 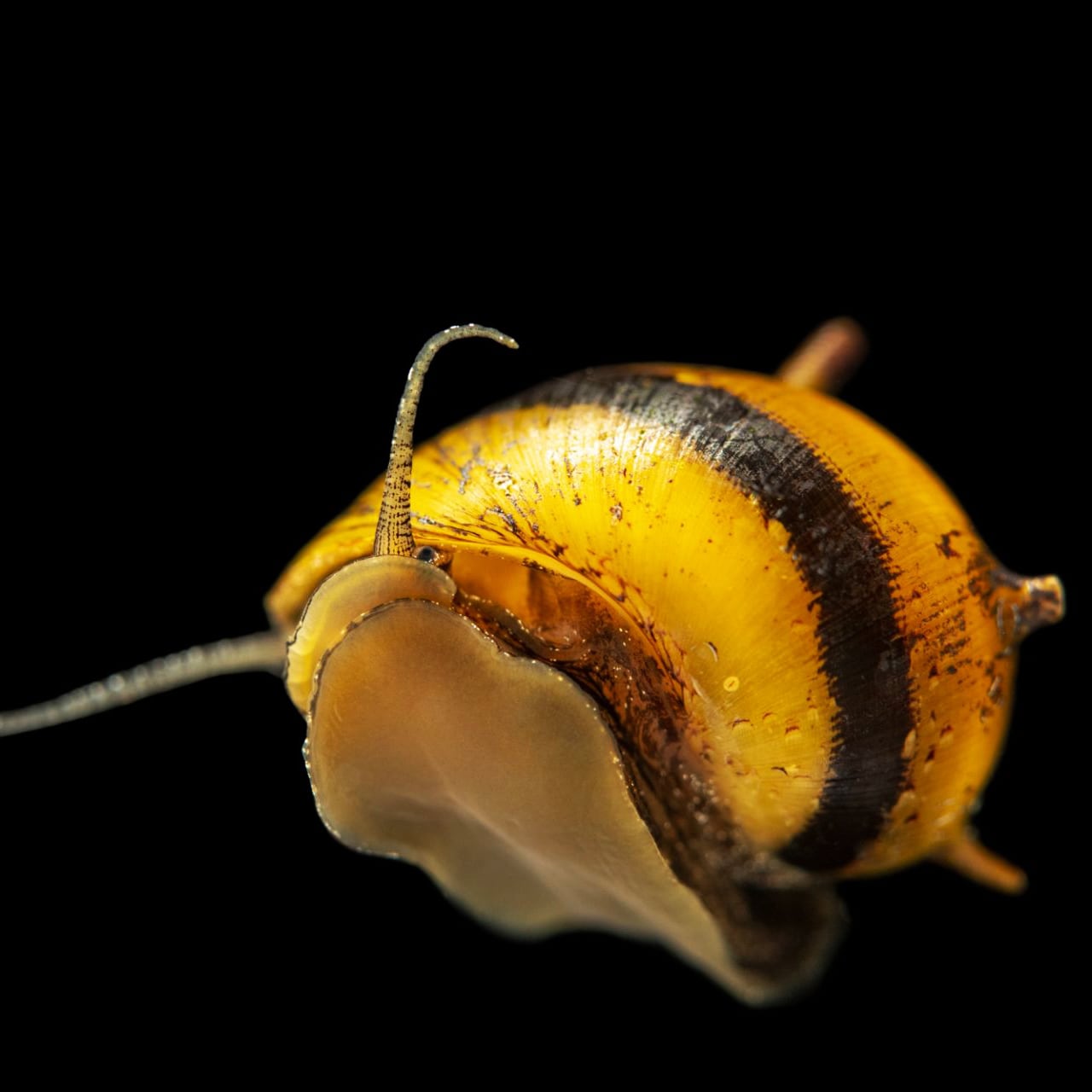 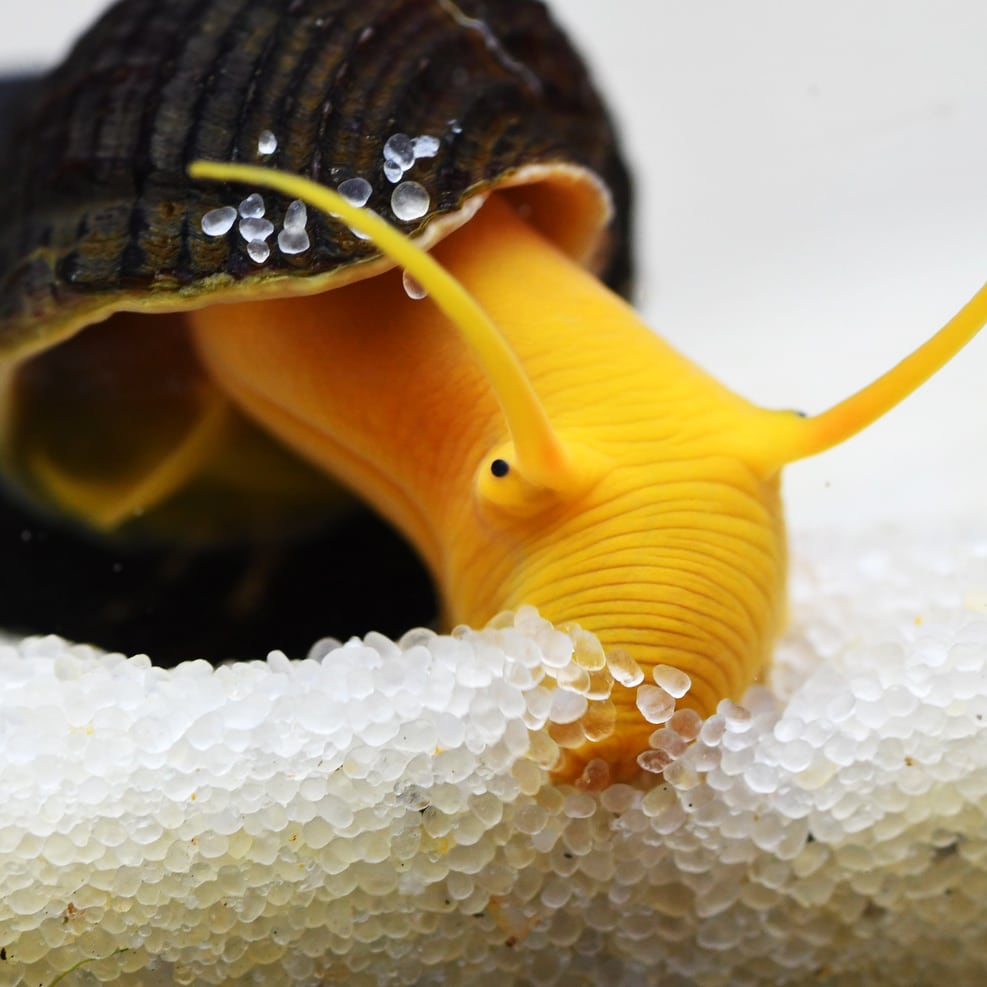 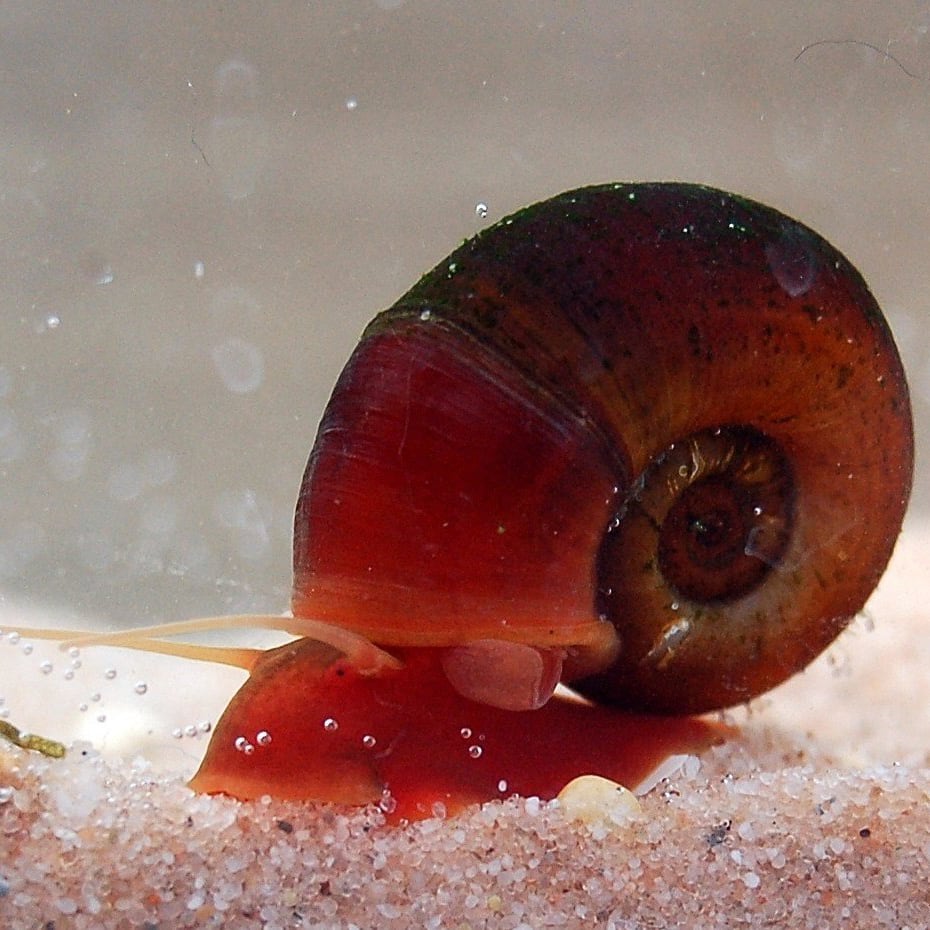 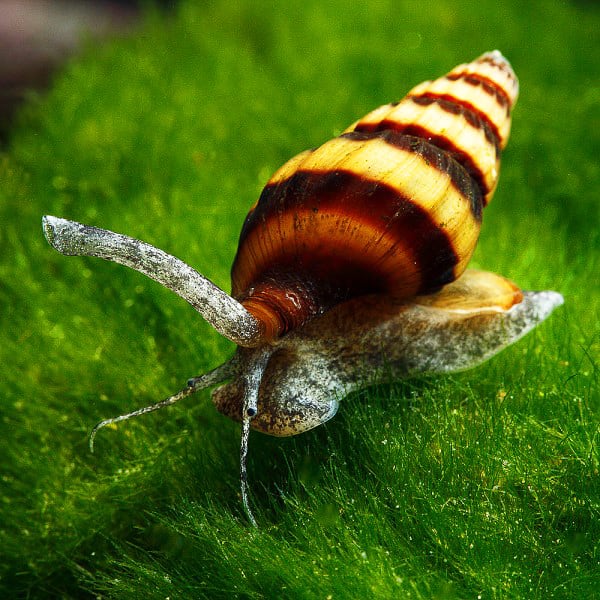 Shrimp will actively munch on algae that forms in your planted tank.

There is a great number of freshwater shrimp species that you can keep in your planted tank. Most of them are quite small, ranging from 1 to 4 cm (0.4 - 1.6 in) and they’re called dwarf shrimp. They come in a wide variety of colors: from white and yellow to deep blue, velvet blue, red, brown, onyx, orange, gold, jade green, tangerine and black.

There are two main groups of freshwater shrimp that aquarists usually keep in their tanks: Caridina and Neocaridina. Both belong to the Atyidae family of invertebrates.

An important thing to keep in mind when stocking your planted tank with freshwater shrimp, is that they are particularly very sensitive to changes in your water parameters. So make sure your temperature, pH and hardness values are stable.

Renowned for their algae eating capabilities, freshwater shrimp don’t have special diet requirements. They will happily feed on fish food left-overs from the bottom of the tank. There is also an option to buy specialised shrimp food from your local pet store or online.

Shrimp will actively munch on algae that forms in your planted tank. For this reason aquarists use them as an efficient and natural algae-removal solution. 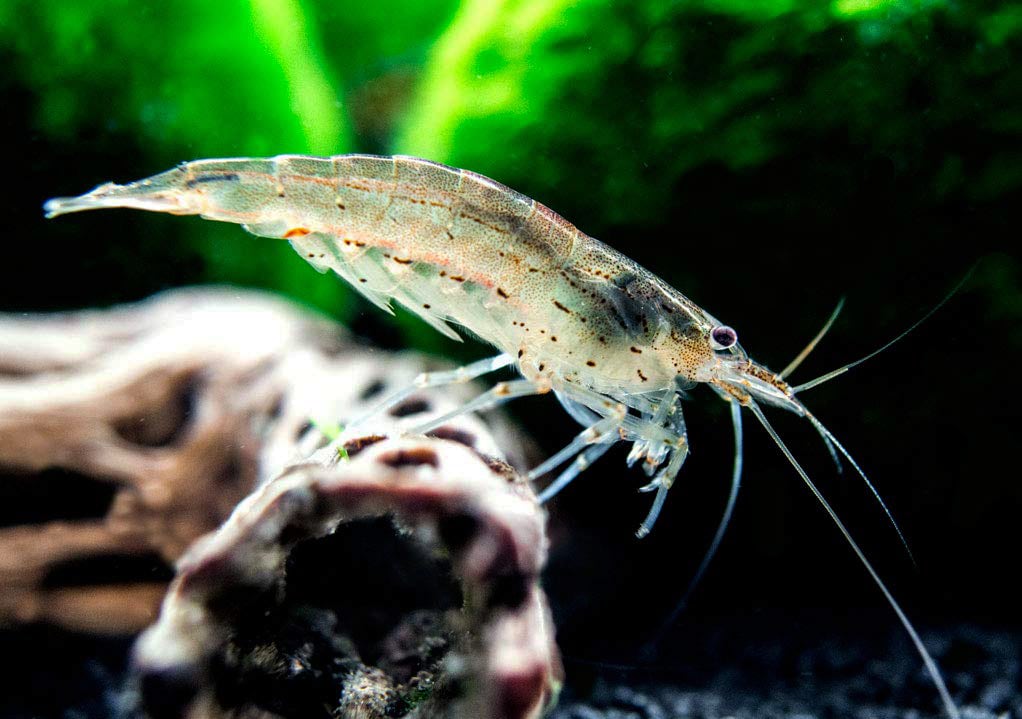 Freshwater dwarf shrimp are very peaceful aquarium inhabitants and they mostly like to mind their own business.

They breed easily (with some exceptions) in aquarium environments, with the female carrying eggs in her saddle (egg nest), located underneath her stomach. The eggs hatch after a period of 20 to 30 days, depending on water conditions.